On the 7th September 2018, the Leeds FinTech community gathered for a morning of networking, insight and discussion. The event was hosted by Addleshaw Goddard.

The forum began with a welcome from Julian Wells –he announced that as of today’s forum FinTech North has now run 20 events. Julian was also excited to announce other FinTech North news that included:

–   FinTech North is expanding into new areas for this next year

–   FinTech North will be hosting a USA Roundtable in September

–   Two international FinTech missions are coming to the northern powerhouse.

We then heard a brief welcome from Simon Kamstra, Partner, Addleshaw Goddard.  Simon told us that AG started representing CYBG 143 years ago, and emphasised how much the world has transformed since.

David Duffy, CEO, CYBG was the first of our speakers – He began his talk by stating how proud he is of CYBG and what it has stood for over the years, with a strong preference for community. He announced that CYBG is acquiring Virgin Money, which will make CYBG the 6th largest bank in the UK. 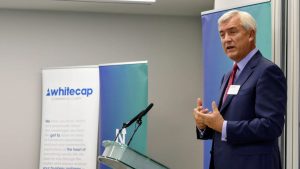 David then moved onto his role as HM Treasury FinTech Envoy.

“The FinTech world is going to drive the north through its next phase of growth.”

David explained that he was asked to move into the role of FinTech envoy, not because of his FinTech expertise, but because of his attitude to collaboration. He stated that he is not a FinTech or tech expert, but instead he represents larger institutions collaborating with smaller firms to build something new and valuable.

David then provided an example of a CYBG partnership with a tech platform that provides SMEs with better and more efficient funding resources (from application to receiving funds in the same day). He then stressed that the bank itself will continue to play a back seat role as new technology provides new and innovative offerings.

“Frankly, most banks have old school thinking. So FinTechs will be the driver of value. Most of banking will disappear in the traditional model we see today.”

Chris opened his talk with stating that attitudes to collaboration such as David’s are critical to innovation and that having 22 fintech firms being integrated into CYBG is something to be really proud of. 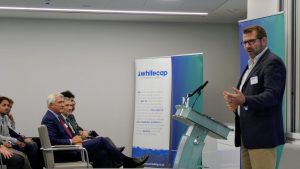 Chris then discussed his work looking into long savings/pensions market. He explained that although we are seeing great advances through innovation in the banking industry, there is still a gap in the long term savings problem. This problem lies fundamentally in a large amount of inefficiency…

“Everyone wants to be in flashy consumer facing payments – but if you can help an asset manager better work with a broker, then you can cut out a huge amount of efficiency. “

“No one is looking at the savings/pensions problem – there is a huge opportunity there for FinTechs. The FCA sandbox haven’t had a single FinTech company that has looked to address the long term savings market.”

Chris then moved onto how universities are showing increasing interest in supporting entrepreneurs and innovation as well as embracing the FinTech sector through skills and resources.

The event then moved to an interactive session with the two FinTech envoys answering questions from the audience. The topics discussed included the difference in funding and supporting resources available to start ups and scale ups between the north and London. David Duffy and Chris Sier both stated that they are working towards addressing this entrepreneurial support ecosystem in the north.

Other topics covered in this session included; if/how banks can collaborate with competing tech offerings and the different strengths and roles across universities in the tech sector

David Hoghton-Carter was next up to explain his project InTACC, which involves using blockchain technology to deliver a socially and community focused monetary network.

He began his presentation by stressing the need for money to work for better for local individuals and businesses.

“When you design any system, you are doing so in the context of the shared human experience.”

InTACC’s platforms will enable local businesses to exchange from one local currency to another using blockchain technology – completely leaving out the need for a banking institution. 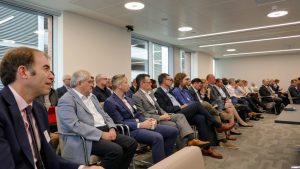 Next up were Addleshaw Goddard representatives Fiona Ghosh and Elvan Hussein, to discuss the AG Elevate program.

Fiona began by explaining that the program looked at how involved they were with starts ups, and found that few start-up firms were able to access legal services. It was because of this need that AG Elevate was born.

AG Elevate provides up to 35 hours of free legal advice every year to their start-ups as well as a dedicated legal mentor for start-ups and access to wider networks. 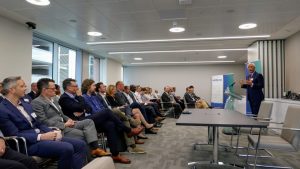 The last of our speakers was James Shattock from Flywire – he founded a startup named pace invoice which came through the AG Elevate program and was recently acquired by FlyWire. PACE Invoice helps businesses manage their incoming payments internationally.

James stated that it was because of the AG Elevate program that Flywire (the acquirer) came across them and eventually got in touch and that the firm was extremely valuable in helping them navigate the intricacies of an acquisition.

As always with FinTech North the event closed with an interactive panel session. Topics covered in the panel included discussions around startup support from an accelerator perspective, as well as the international relationship between Leeds and Boston,USA. 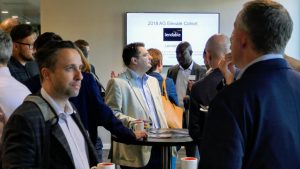 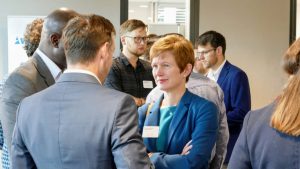 Thanks to everyone who attended FinTech North this month, to our hosts Addleshaw Goddard and all of our speakers for their insightful presentations and discussions.