MURISON: “FINTECH IS CRITICAL FOR THE FUTURE OF MANCHESTER’S ECONOMY”

The future of Manchester’s economy will be heavily reliant on FinTech, according to the Director of the Northern Powerhouse Partnership, Henri Murison, in a speech delivered at today’s sell-out Fintech North conference. The city’s status as a world leader in financial services, together with its increasing prominence as a major digital hub, create the ideal environment for its growing FinTech sector to become a huge economic driver. 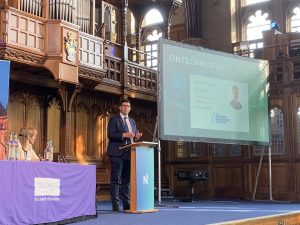 This was echoed by Dame Nancy Rothwell, the President of the University of Manchester, who recognised the growth of FinTech in the city and outlined the steps the University – recently named as the fastest growing in the world for innovation – is taking to ensure it creates more opportunities in FinTech for its students.

Speakers from across politics, business, finance and academia addressed a 360 strong audience in the University of Manchester’s Whitworth Hall to discuss the FinTech ecosystem in Manchester and the North as a whole. It marked the second annual FinTech North conference in Manchester, following its debut sell-out event last year. Attendees included investors, regulators, academics, entrepreneurs and innovators from finance and technology.

Henri Murison added that the key differentiator for FinTech in Manchester and the North is the overwhelming focus on the end consumer, rather than on other businesses. The number of large retail banking operations which prioritise consumer relationships will attract more investment into the city, he said. This will hopefully help to address the imbalance in FinTech investment across the UK, with London currently receiving approximately 94% of the total investment.

Greater inter-city collaboration across the UK was also championed as a route to closing this gap, with the Chief Executive of Innovate Finance, Charlotte Crosswell, confirming that there are a growing number of organisations in London who are actively looking to engage with FinTech companies in the North.

The event’s headline speakers were joined by some of Manchester’s fastest growing FinTech startups, including Mojo Mortgages and AccessPay, who discussed why the city is the ideal environment for startups in the sector.

Richard Hayes, co-founder and CEO of Mojo Mortgages, a South Manchester based mortgage fintech that has raised over £7 million in venture capital to date, said:

“Just because we aren’t in London doesn’t mean we can’t be a big name in FinTech. The sector is seeing huge growth in the North. It’s important to be part of that movement, and play our role in helping to further establish the region as a serious FinTech ecosystem in the UK.”

“Last year saw our first annual FinTech North conference in Manchester, and it was a huge success, so we wanted to deliver something bigger and better this year. As an independent, community-led and not-for-profit organisation, we want to provide a platform for the region’s FinTech community to discuss the issues that really matter to them. We hope that in doing so, we will provide opportunities for deals to be made, collaborative partnerships to be formed, and a new generation to be inspired – ultimately helping the regional FinTech economy to grow further.”

Tickets are now on sale for FinTech North’s next conference, which will take place in Leeds on May 23rd. 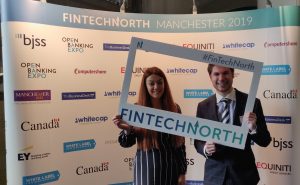 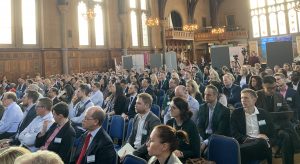