FinTech North held its debut event in Bradford on 28th March 2019 with an event focused on blockchain technology, its opportunities and use cases.

Julian Wells kicked off the event with an overview of FinTech North’s activity to date as well as its upcoming events, including the Manchester Conference on the 17th April and Leeds Conference on the 23rd May. 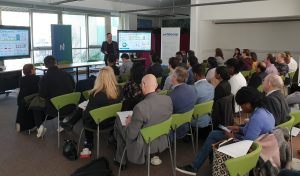 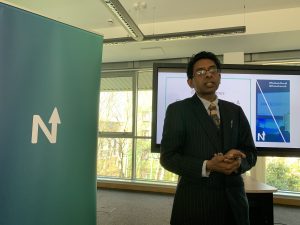 The audience heard a welcome from Dr PB Anand, University of Bradford.

He told us that the university holds three strategic streams: innovative engineering, advanced healthcare and sustainable technologies, all of which have recently been linked with blockchain technology. PB told us how the university looks to continually develop interdisciplinary teams and skills across knowledge areas and sectors. New degrees being rolled out at the University of Bradford in the near future will be designed to be cross-departmental, reinforcing this multi-disciplinary focus.

Stefan was first up to present, providing an introduction to the fundamentals of blockchain technology, with an interesting use of a video that explains the blockchain using canned meat.

Financial services is just one application of blockchain. There are so many use cases of blockchain. For example, Estonia is one country leading the way in blockchain for public sector use.

Stefan provided examples of blockchain covering different sectors, including: public sector, insurance, healthcare, travel industry and supply chains. He then identified how the excitement around blockchain has led to some people leading with the tech first rather than problems/solution.

At Whitecap, we’ve had people ask us, “find me a way that we can use blockchain”. That’s not the way to go about it. You need to think about the business problem you want to solve, and THEN decide if blockchain is the right way to deliver that solution.

On the advantages of blockchain, Stefan highlighted:

Trust is a key factor in blockchain. On the blockchain, you don’t have to trust one party to handle a transaction of data/value. Also, blockchain removes complexity in a supply chain, so you don’t need to go through multiple parties to access the information you need. Everything is recorded.

Blockchain is still very early doors and there’s still issues to be overcome. But like the internet: ignore it, and you’ll be missing out in few years’ time. 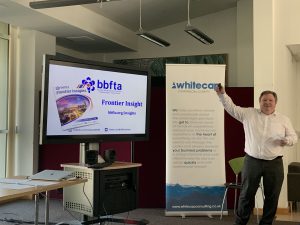 Barry was next up and having provided an overview of his work and experience explained how the internet created a  decentralised network and the web decentralised data.

Blockchain was made to decentralise, money and value – the Internet of value. This is the next wave. According to Coinbase, 42% of the world’s top universities  are already offering courses on blockchain technology.

Barry alluded to how although blockchain can be freely utilised by anyone, we have a responsibility to build the future responsibly. There is an opportunity for blockchain to help solve major social and environmental problems.

Barry moved onto current use cases where blockchain is making a significant difference and mentioned Frontier Insights which surveys the horizon on a weekly basis. The cost of insurance has rapidly come down through its use in process innovation. This has opened up a new segment of insurance, micro-insurance. Other examples included tracking diamonds, retail supply chains and humanitarian aid money.

Barry then explained the vision that blockchain can be transformative for the world by providing global public infrastructure.

UnRent is a current project Barry’s team is working on whereby individuals get to own their own home, one bite at a time, with the assets and value held and distributed via blockchain. Read more at unrent.org.

Our last speaker, Danny Waite is a tech developer and blockchain enthusiast. Danny’s presentation had a more granular look at the tech, its current players as well as its opportunities and challenges in the future.

Danny started with the key reasons why we should use blockchain:

Danny briefly covered ICOs (Initial coin offerings)  which have gained traction as they offer a new way for companies to receive investment. Similar to offering shares, ICOs offer tokens which are hosted on the blockchain and can be tradeable.

Blockchain and Ethereum, which Danny described as Layer 1 blockchains had first mover advantages but are now considered to be too slow by some. So many new offerings have been developed to replace them.

Danny explained how there is now a lot of competition in the blockchain market and that these new offerings that are looking to come out on top as the most used. Danny suggested that in the future we might see a ‘blockchain of blockchains that allow users to transact across a host of different chains via a singular blockchain.

Danny identified that some ICOs have been seen to be fraudulent, with investors’ money being lost and or stolen, which is due to a lack of governance. This has led to backlash on ICOs and a decrease in their popularity. There are now new offerings that look to provide a layer of regulation and governance around ICOs, making sure deals hit certain criteria. This has helped investors support new opportunities with a higher level of trust. This movement is seeing ICOs become IEOs (initial Exchange offerings).

My prediction is that we will see the tokenisation of real world assets, that can be tradeable on the blockchain.

The speakers and Chair Julian Wells then gathered for panel discussion and received questions from the audience.

Topics during the panel included: risks leading to another financial crash, regulation, calculating monetary value of new assets, adoption speed, use cases for voting in elections, use cases for financial inclusion, and the development of the front end user experience. 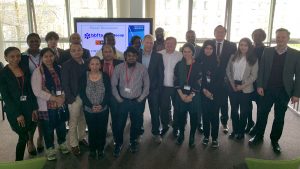 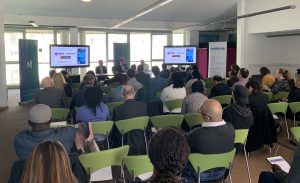