On Friday 11th October the FinTech North community came together at Squire Patton Boggs Leeds to discuss all things Blockchain!

Paul Anderson was next up giving a welcome on behalf of Squire Patton Boggs, Paul highlighted colleagues joining us from Prague and Madrid who have joined the event. Danica heads up SPB’s European Blockchain Group and Tania lectures on Legal Aspects of Blockchain at the Blockchain Specialisation Program of the Instituto de Estudios Bursátiles in Madrid. 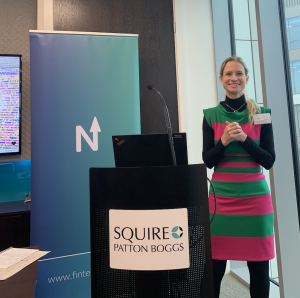 We then handed over to Danica and Tania to speak about Facebook and its cryptocurrency project; Libra. Tania gave us an overview of the Libra project; Libra has seen considerable backlash because Libra’s characteristics are at odds with the existing legal and regulatory framework. Libra is seen as a systemic risk to many economies, with regulators lacking the tools to enforce regulation. 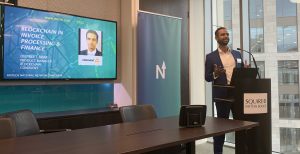 Dilpreet Brar then spoke about Blockchain in Invoice Processing and Finance. Dilpreet contextualised his talk by speaking about the genesis of cryptocurrencies. Ripple is a currency Dilpreet holds in high regard, as a currency trying to tackle a payments issue. The audience was then taken on a journey through the Conduent Blockchain Platform, an open modular platform designed to support the industry specific blockchain ecosystem.

Barry James, chair of the British Blockchain and Frontier Technologies Association, was our next speaker;

Barry “Libra may never happen, but it has changed the game”

Barry explained how the game has changed from ‘How do we resist this thing?’ to central banks announcing digital coins. We are now dreaming about a global mainstream currency that everyone can use. Barry mentioned that BBFTA produce a weekly analysis entitled Frontier Insights.

Barry then spoke about how Blockchain can tokenise not just money, but other things such as the home-buying process. unRent aims to work with peer to peer technology to tackle generation rent with a new business model. Beyond Rent is a support campaigning organisation to tackle the issues in the sector. Blockchain is bringing about new approaches and models to help address the alarming difficulties generation rent have in getting on the property ladder.

Dr Julie Wilson was next up, chief product officer at Blocknorth:

“The perceived barriers to adopting technology haven’t been addressed” – Julie

Blocknorth’s TUTI (technology uptake technology impact) is a tool to address the above to help implement new technologies. Produces a diagnostics report which feeds back on key factors; strengths, barriers to tech adoption, how far along the company is internally, how far along they are compared to their peers. This provides a sense of where they are and what they need to do to move on.

Gary Woodhead, CEO of Curveblock, explained how Curveblock are using digitalisation to create company equity in Real Estate development, removing the entry barrier allowing public to step onto the platform to own Real Estate equity. This allows easy investment and liquidity.

We then moved onto our panel discussion. Danica unveiled the results of an interactive survey, revealing the perceived benefits of Blockchain adoption to be very broad amongst those in the room. 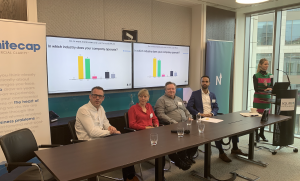 Q: Why use blockchain?

Gary Woodhead – “for us it’s eliminating the paper trail and eliminating the entry barriers, technology enables the transactions to take place and monitors who has what share.”

Barry James – “Without it, you couldn’t coordinate an ecosystem autonomously”

Q: Are we going to get to the promise of blockchain decentralisation?

Gary –“There will be decades of regulatory compliance that gets thrown at this.”

Barry – “It isn’t about profit it’s about control”

Q: How do we make sure we get the correct blockchain solution?

Julie Wilson – “Understand what your needs are, where you’re going.”

Q – We have gone from talking about blockchain to doing, by this time next year what use of blockchain do you think you will be using?

Julie – “Some mechanism for these platforms to work together.”

Gary – “Entry barrier removal, I think Blockchain will make the internet look like a drop in the ocean.”

We have regular FinTech North events right across the Northern Powerhouse. Check out our events on our events page.