Webinar review: The Role of FinTech in Personal Debt

On Friday 26th June we hosted a webinar on the subject of FinTech and personal debt, the second in a two part series held in partnership with Leeds City Council, following a webinar on business debt held earlier in the month. We have recapped the webinar discussion below and you can view the recording here. 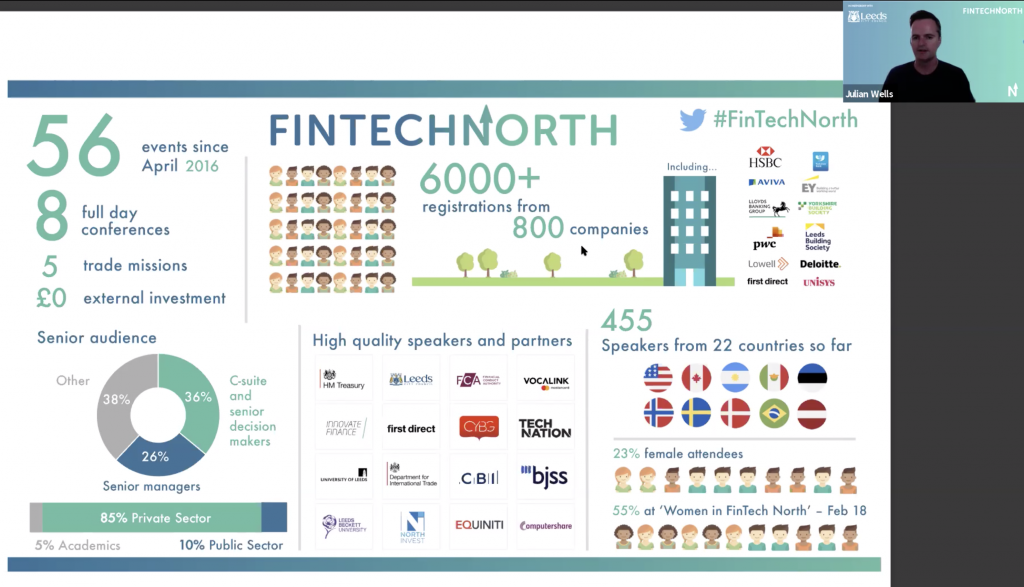 We were joined by a panel of speakers with different areas on interest in this topic:

Julian Wells opened the event, welcoming the attendees and explaining that FinTech North has been delivering events since 2016 with the aim of providing a forum for the northern FinTech community to come together in.

Chris Sier gave an update on the broader FinTech scene. Chris feels the government and other central entities have become more aware of the need to protect the FinTech community outside London. Chris would like to see better communication and more communication between London and the regions, including the north. He also highlighted the challenge for the regions within England when compared to the devolved nations where substantial funding has been made available to help grow the regional ecosystems.

Eve Roodhouse explained how Leeds City  Council has been supporting individuals through the Covid-19 crisis and outlined some of their concerns for the future. Leeds has an inclusive growth strategy and since prior to Covid-19 it has had an objective to address inequality in the regional economy. Universal payment claims have risen in the UK by 125.9% since March in the UK, and between February and April there has been a reduction in self employed of more than 100k people. 81% of all businesses have applied for the furlough scheme, which is an indicator of what is the come in the economy when this and other support measures are removed. Eve cited millennials as a group which we should be particularly concerned about, also highlighting that a lot of debt issues have effectively been frozen during Covid-19 (for example credit cards and mortgages). Leeds, like other cities, is placing an importance on the role of innovation in the recovery, and is highly supportive of FinTech, FinTech North, and other parts of the digital sector.

Anthony Morrow of OpenMoney, a Manchester-based FinTech which supports consumers with their financial management. The firm was set up to help the public get better access to support to help them manage their money, initially on the investment side of things. It has around 80k customers including a large number of millennials. About 80% of its customers have issues with managing debt, so the firm has used open banking to help these people better understand their finances. Anthony noted that high levels of debt combined with low levels of understanding were already evident before Covid-19, especially amongst millennials and those slightly older than this, who have not been able to build a strong financial base. OpenMoney’s long term ambition is the be an accessible and affordable one stop shop for people’s finances.

Vanessa Northam of StepChange, the UK’s largest debt charity, previously worked in FinTech for an open banking provider OpenWrks (focused on the Tully proposition), so is well aware of the ways FinTech can help with personal debt issues. FinTech can help people avoid the need to deal with organisations such as StepChange. Although many people associate the charity with telephone support, about 70% of StepChange’s support is delivered digitally. Open banking can help with a lot of the ‘heavy lifting’ in income and expenditure analysis that is required in debt management.

StepChange released a report in May which can be found here.

Stepchange has seen a huge spike in people with payment issues since the start of the pandemic. There was also a reduction in the demand for debt advice, which was caused by the pausing of collections activity. A lot of the payment holidays that have been taken are assumed to be masking underlying debt problems. Utilities and council tax payments are becoming issues. StepChange is preparing for what comes next once furlough phases out and unemployment becomes more prevalent.

Harjit Moore represents Leeds-based Freeze Debt, an app to help people with managing debt. The app uses Machine Learning to create a debt solution that included rules used by various organisations to help consumers understand how to engage with them. It has around 42k consumers signed up. 70% of the time Freeze Debt can help consumers without any interaction outside the app. It has integrated with open banking since day one and has a relationship with Credit Kudos. Harjit highlighted the way that attitudes to debt have changed over the years, and debt is now an accepted part of life for most people, and that FinTech has made lending and borrowing easier and faster processes to access.

During discussion the panel talked about the opportunity for a region such as Leeds to take the lead in modelling a solution to use data to help take a more predictive approach to identifying the critical signals of debt problems before they occur or become more serious. People have a tendency to prioritise their financial repayments ahead of other payments such as utilities and council tax, as they know this will affect their credit rating. Factors such as an increase in the number of direct debits on someone’s account are early indicators. Potentially in advance of a national rollout something could be trialled regionally whereby people accessing benefits are required to sign up for an app or service which would link with people’s finances and would help flag early warning signs to local authorities and other organisations.

Watch the recording of the webinar here

Read about our previous webinar on business debt here, which was also held in partnership with Leeds City Council. After that event we recorded a short video with Eve Roodhouse, which you can watch here.